Oppo’s R7s was spotted at TENAA in September and will be released later this month. As per a Chinese company, the successor to the R7 will be introduced during the Gulf Information Technology Exhibition (GITEX) which will take place in Dubai from 18th to 22nd October. 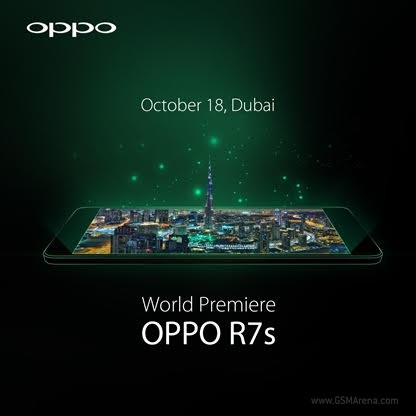 We can expect a bigger battery from the R7s smartphone with a larger screen ad double storage capacity in comparison to the predecessor Oppo R7. It boasts a full metal unibody and stellar photo-taking capabilities of its predecessor.

This handset will be powered with a Snapdragon 615 SoC with 1.5 GHz processor. It sports a 5.5 inch FullHD AMOLED display. There will be 32 GB expandable memory and 3GB RAM. The phone will get a 13 MP primary camera at back and 8 MP secondary camera in the front. It will run on the latest Android 5.1.1 Lollipop version. The source says that Oppo R7s will be released along with the R7 Plus, R7 Lite and Mirror 5 smartphones.