HTC has an upcoming event on 20th October, where it might announce the latest flagship One A9. However, the phone just keeps on leaking before its released. This time we have a new benchmark run completed by One A9, which means we get a list of its specifications.

We have already seen One A9 put through the specs of GeekBench in September and now GFXBench application is used. However, its quite strange to notice that the specs are quite different. 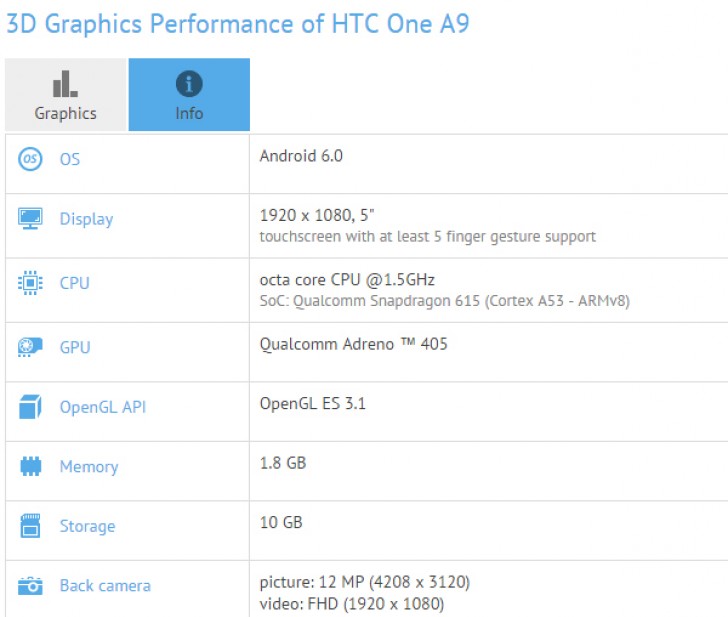 As per the GFXBench, the One A9 is powered by Snapdragon 615 SoC chipset which comes packed with an octa core Cortex A53 processor with 1.5 GHz speeds. But the GeekBench had these specs coming with the MediaTek Helio X20 and showed that the phone supported a ten core processor. Also, the benchmark talked about this phone having Snapdragon 617.

HTC’s One A9 smartphone will get a 5 inch touchscreen display with 1080 pixels resolution There will be a 13 or 12 MP primary camera and a 4 MP UltraPixel selfie snapper or 5 MP regular one. The phone will be packed with 16 GB internal storage and 2 GB RAM. For connectivity, HTC has GPS, Bluetooth, NFC, GPS and Wi-Fi. According to the source, the prototype which is benchmarked has Android 6.0 Marshmallow, which is the latest operating system version from Google.

If you are interested in buying a HTC phone for yourself, One M9 can be a good option. You can also purchase this smartphone from us. In order to buy it from izikart check out the best HTC One M9 Gold offers in United Kingdom.