As we know, Huawei recently released its list of devices scheduled for Android Marshmallow update, but it did not give any information on when exactly this update will roll out. Now, there is good news that the company has finally revealed the exact time frame for this update to roll out. However, it is reported that only selective Honor based smartphone will get it. 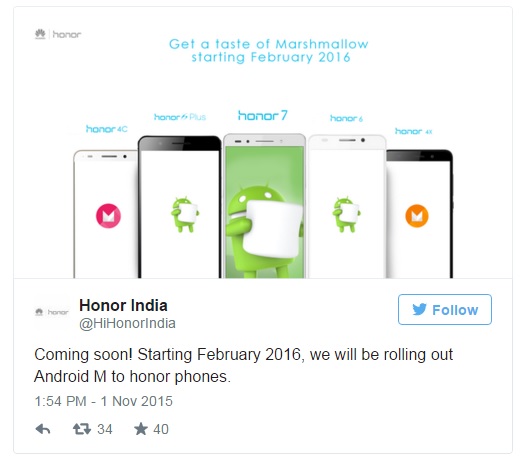 The company confirmed via an official tweet its devices that will get updated to Android 6.0 i.e. Honor 7, Honor 6 Plus, Honor 6, Honor 4x and Honor 4C. Also, these handsets will receive the Android update in February 2016.

However, if you were not aware about this initially the Chinese company has planned a couple of launch events lined up this month. We can expect the Kirin 950 SoC to be launched by Huawei in this week, which will be followed by the Mate 8 smartphone towards the end of this month.