Samsung has plans to add a new member to its metal class Galaxy A line soon. The upcoming phone is the new Galaxy A9, which is the high-end offering of the company as a part of it’s a series. So far, the upcoming Galaxy A9 smartphone is spotted in two benchmarks with some of its specifications revealed in the process. 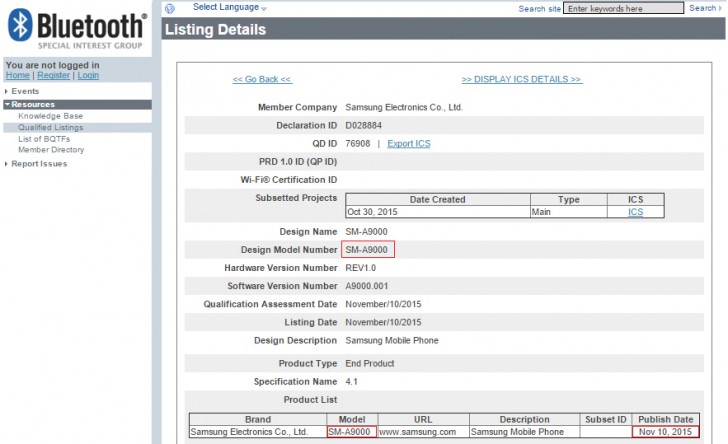 The phone was also seen in an Indian import listing recently and has now received its first Bluetooth certification. Bluetooth SIG has done its part and has approved the upcoming A9 with model number SM-A9000. With this new certification, we can expect the handset to get some more certifications in the near future. Also, there are expectations that the phone might become official soon, perhaps before the end of this year.

Previously leaked specs show that Samsung Galaxy A9 will come with a 5.5 inch or 6 inch display with 1080 pixels resolution. There is 32GB internal storage capacity and 3GB RAM powered by Qualcomm Snapdragon 620 chipset. This smartphone comes with an octa core processor sporting four Cortex A72 cores with 1.8 GHz clock speeds and four Cortex A53cores with 1.4 GHz clock speed.

There is an Adreno 510 graphics processor and the SoC has support for Catt.7 LTE with peak downloads of 300 Mbps and uploads of 100 Mbps. Also, the upcoming Galaxy A9 smartphone runs on Android 5.1.1 Lollipop while Marshmallow update for the phone is on the way.