A class action suit was filed against Apple last month for failing to tell the users that Wi-Fi Assist on their smartphone was eating up their monthly data allowance. This feature switches an iPhone that is connected to Wi-Fi network, over the cellular carrier of the user’s if Wi-Fi signal becomes weak. However, the theory sounds great but the feature was enabled itself by default when Apple disseminated iOS 9. 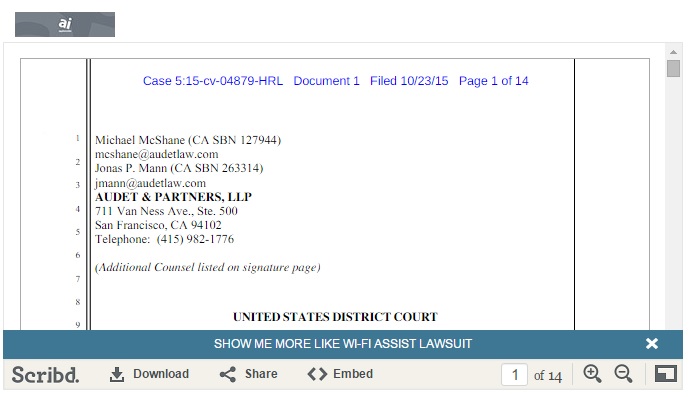 Also, Apple initially failed to tell its users about this feature until they were surprised by their bill from carrier. After iOS 9 was pushed out, this feature became a default one on the iPhone and the iPhone users were really surprised to see their monthly bills which showed much amount of data they used for that month in comparison to their past usage.

As a result, there are now two Class Action suits filed against the Cupertino’s giant, both seeking for more than $5 million. As per reports, the second suit was filed in U.S District Court for the Northern District of California by one William B Cottrell. This suit charges Apple for violating California’s unfair competition law and false advertisement law.

According to the suit, Apple misleads its customers by omitting or hiding facts about the feature, including the fact that this feature was turning on by default. In response to this, Apple stated that most of the users will see just a “small increase” in the data usage with Wi-Fi Assist. Also, this feature won’t activate when the iPhone user is streaming music or video.