Samsung Galaxy A7 has now cropped up in AnTuTu, the phone recently got certified in Bluetooth SIG. According to this benchmark, the phone has an Exynos 7580 chipset for A710F, A710S and A710K. However, this chipset doesn’t rule out the Snapdragon 615 version like the Galaxy J7, which also supports various versions with the 7580 chipset. 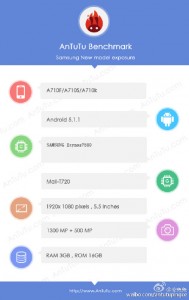 The new Exynos 7580 chipset is aimed at the mid-range and has eight Cortex A53 cores and Mali T720 GPU. It is paired with 3GB RAM and 16GB internal storage in the new Samsung Galaxy A7 smartphone. This handset runs on Android 5.1.1 Lollipop for benchmark.

It has a 5.5 inch display 1080 pixels resolution. There is a 13 MP primary camera and 5MP front facing snapper. The new Galaxy A7 has not changed much in terms of its looks but the glass may have a 2.5D shape. Also, the loudspeaker on the phone is relocated. According to the reports, the new Samsung A7 won’t launch until after next year and it is clear from the leaks that there is an A5 update in the works too.