Samsung’s second generation Galaxy A7 is now certified by the FCC, after having received the certification from the Bluetooth SIG and China’s TENAA certification. The successor of the original Galaxy A7 smartphone from earlier this year is leaking a lot lately, along with the other members of the A family. We already have seen the A7 handset in some live images and it was also spotted in the benchmark database as well. 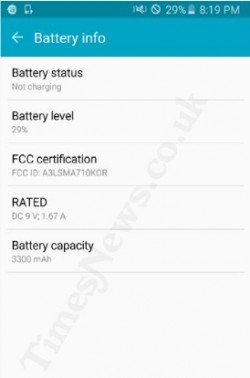 Now, the FCC certification reveals that the new handset will get 3,300 mAh battery, which is bigger than the original A7’s 2,600 mAh battery. This shows that this new model should last more on a charge. As per the Chinese Certification, the A7 phone is 151.8 mm long, 74.5 mm wide and is narrower than its 76.2 mm predecessor.

For connectivity, there is a 4G, Wi-Fi, Bluetooth and GPS available. Samsung’s phone was also certified by TENAA a few days ago which already gave us the complete picture of its specifications. It has a 5.5 inch AMOLED Touchscreen display with 1080 pixels resolution. There is a 13MP rear snapper and a 5MP front facing camera. The manufacturer has provided this smartphone with a 3GB RAM and is powered by an octa core processor with 1.7 GHz clock speeds. It runs on the Android 5.1 Lollipop operating system.