Samsung’s latest flagship smartphones namely Galaxy S6 Edge+ and Galaxy Note 5 received their first ever software update back in october this year. Now, there are reports that the company has started rolling out its first OTA update to both the devices. 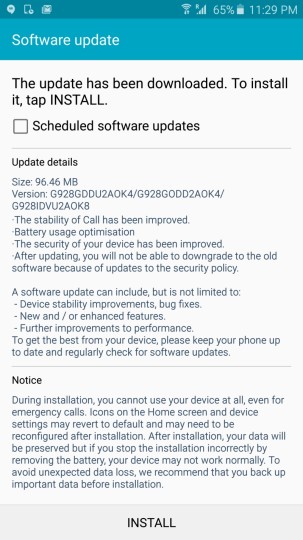 However, it is still difficult to say what is new in this update as the change log is same as the previous update. The update rolled out previouslt brought along call stability, battery optimisations and improvements related to the security of the devices. This new update weighs about 100MB and carries a build number if N920GUBU2AOK3 and G928IDVU2AOK8 for the Galaxy Note 5 and Galaxy S6 Edge+ respectively.

Samsung’s new software update will include Android’s November security patch. If you have not received the update notification yet, you can manually check for it by heading to the Settings → About device → Software Update on your device.

If you want to buy the flagship phone of the Korean giant in UK just check samsung s6 edge plus deals from the best retailers available.