Samsung made its Galaxy A9 official in China last week only, but its pricing and availability details were not revealed. However, now we have some information about the price tag this smartphone will carry along in the Asian country. A user shared some screenshots of A9 phone on Weibo, which reveal that this handset will cost RMB 3,199 in China. 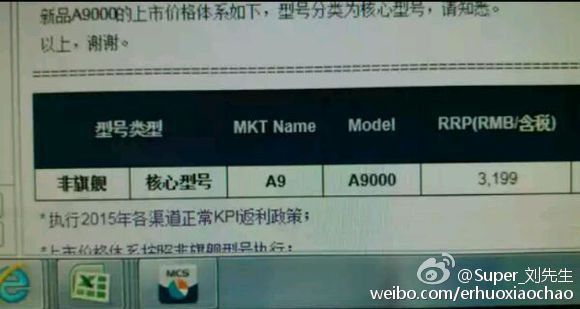 You will get a smartphone powered by Snapdragon 652 at that price. It comes with a 6 inch Super AMOLED display with 1080 x 1920 pixels resolution and 3 GB RAM. There is an internal storage of 32 GB which can further be expanded using a micro SD card.

Samsung has provided this handset with a 21MP rear snapper and an 8MP camera facing front. There is a large 4,000 mAh battery and it runs on the Android 5.1.1 Lollipop software, with planned upgrade to version 6.0.