Samsung’s upcoming Galaxy S7 smartphone is now expected to roll out in Europe on 11th March this year. This information is revealed via leakster @ShaiMizrachi, who has also provided some important information about this handset in the past as well. 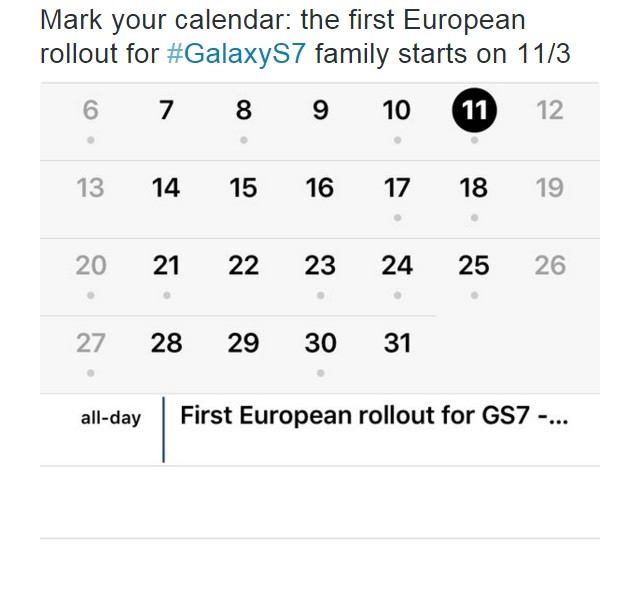 If we believe this date to be correct, then it will also be the time for global roll of this smartphone simultaneously. Last week, the same date was also revealed by a reliable leakster @evleaks as the date for the US release for this handset. Also, there was a leak showing the China Mobile Slide from the last month which also confirmed that Samsung Galaxy S7 will be launched in Asian countries in March.

This handset will come packed with 5.1 inch Super AMOLED Capacitive Touchscreen display with 16M colors providing for great viewing angles. The display has a resolution of 1440 x 2560 pixels and comes with 576 pixels per inch density. It has been provided with the Corning Gorilla Glass 5 which makes this display resistant against the water and dust.

Samsung’s upcoming phone is powered by a Qualcomm MSM8996 Snapdragon 820 chipset and Exynos 8890 octa core processor. It runs on the Android 6.0 Marshmallow and is packed with Adreno 530 and Mali T880 MP12 GPU. There is an internal storage of 32/64/128 GB and 4GB RAM for faster processing speed. This handset sports both the primary and secondary cameras, pixel size for which is not yet known. However, the camera will get OIS, dual LED flash, Geo-tagging, face detection, touch focus and auto HDR.