Recently, we heard that the upcoming flagship phone of HTC, the One M10, will not get the HTC branded black bar positioned below its display. Now, we are getting the very first look at the next generation flagship phone of the Taiwanese giant.

The image is leaked out as the courtesy of @evleaks, showing a phone which resembles somewhat to the recently launched One A9 handset. HTC’s branded bar is now gone, so we can assume that this will be the first HTC One device not getting it. Thus, we can clearly see from the image that this smartphone looks quite different from its predecessors. 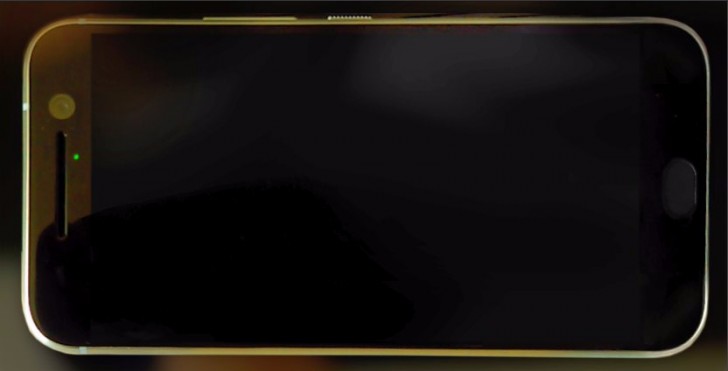 On the other hand, the phone can be seen with a rounded home button which looks almost similar to the One A9 phone, and includes a fingerprint scanner. As pre recent rumors, One M10 is packed with a 5.1 inch AMOLED Quad HD display with 1440 x 2560 pixels resolution. It is powered by Qualcomm Snapdragon 820 chipset and 4GB RAM for faster processing speed. There is an internal storage of 32 GB which can also be expanded further.

HTC’s upcoming phone will get a 12MP UltraPixel primary camera with laser auto focus and LED for better clicks in dim light situations. Overall, we can say that this handset will be more advanced than the One M9 model from the manufacturer.

Since, @evleaks is a reliable source and has proved out its worth many time, so we believe that these images are showing a real device. HTC has confirmed that it will announce this smartphone sometime in March this year.