Google has now made an announcement that it is currently rolling out an Android security feature, which will be launched soon. This feature will launch native notification when someone logs into the main Google account of your device from some other device. If you have ever signed into the Google account from a new device then you are probably well aware of the current account log-in security measures from Google. 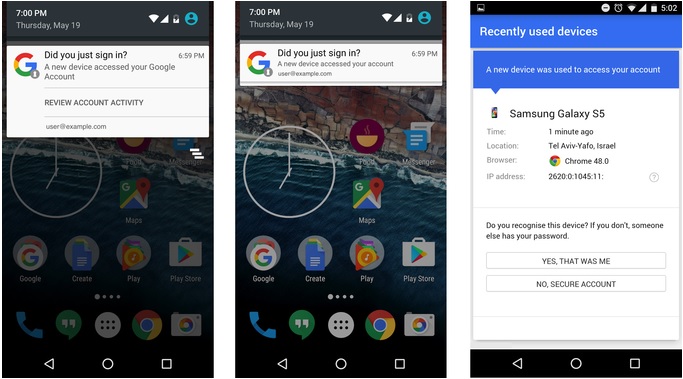 According to these security measures, when you will log-in to your Google account from a new device, you will receive an email in your Gmail account informing you about the new sign-in detected. However, this feature allows the Google users to get information when their account is being used on non-recognized devices but at the same time there are also some pit falls that people might fail to see the warning in time to prevent potential damage. This is where this newly launched feature of Google comes to work.

By just instantly launching a native android notification to your device, whenever someone logs into your Google account form a non-recognized device, you will be warned immediately that your log-in credentials have been compromised. In tests, it has been found that users are four times more likely to review the notification received from the Android notification in comparison to the old email notification system.

In a statement, Google says that if the users find a log-in suspicious then they can check out the additional details by pressing the “Review Account Activity” button. This button will enable the users to get information such as the name of the new device, its location and many more. If the notification is shown because of an expected activity then users have the option to dismiss the notification. The new security feature is rolling out soon, Google says that it will be out in next 14 days.