Today, is the day for Samsung’s Unpacked event where it is expected to unveil its highly anticipated Galaxy Note 7 smartphone. A new rumor has appeared with a new batch of shots showing another look of this upcoming smartphone from the manufacturer. This time the Korean giant has also given a look of the retail box to its users. 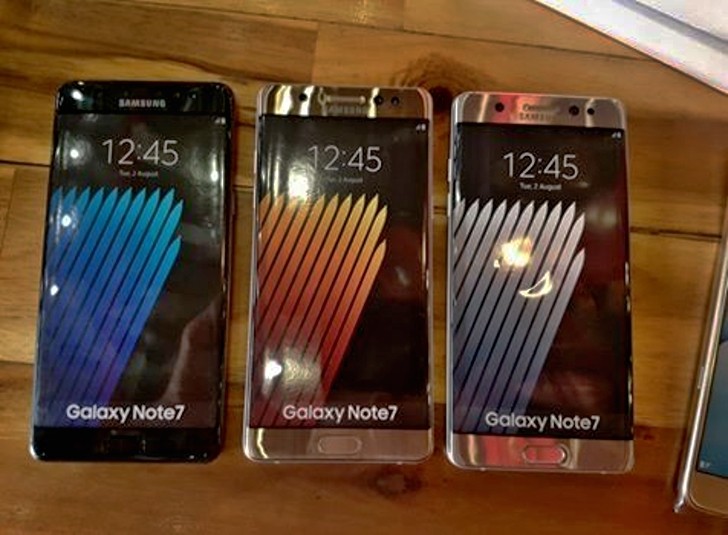 It is reported that the leak covers not only one unit but total three. In the recently leaked photos, we can clearly see the Samsung Galaxy Note 7 smartphone in Black Onyx and Silver Titanium. However, the phone is also expected to get a Gold variant, which was seen in the leaks earlier today only. The stills doesn’t show the quality of the official press renders, which were seen online a few days ago. However, we can now count a total of four colors for this smartphone. And this suggests that it is the final and official color selection for this smartphone, which will be unveiled soon.

There is a new leak which shows a close-up view of the retail box for this smartphone. The retail box has a short specs summary on one of the side of the cardboard enclosure.  However, the retail box gives only a brief idea of the specifications for galaxy note 7, but it’s atleast a proof  of a few specs. Currently, we are expecting Samsung to pack this smartphone with 143.9 mm thickness.  And a 5.7-inch display with quality viewing angles. The screen size of this phone shows that the Korean giant has stuck to the signature measurement for another Note iteration.

Currently, there is not much information about the chipset but we are expecting Samsung to use either Snapdragon 821 and an Exynos 8893. The internal storage will be 64GB, which can go as high as 128GB and the RAM will remain the same. This means that the manufacturer has decided that it will not jump to the 6GB hype train. Other interesting information includes the camera setup, which shows the possibility for a “Dual Pixel” moniker and 12MP primary snapper. There will be a 5MP front facing camera and the Note 7 will also be IP68 certified.