Last month, we got to hear from Sony first time ever about the date for its IFA press conference. And now there are reports that the giant has started sending out the invites for its event to be held on 1st September. A picture of the invite is also leaked online, which is revealing that the manufacturer is planning for many different product types on this upcoming occasion.

We can also see a phone in this picture, which reveals that we might get a new Xperia device. The phone shown here looks nothing like the oft-leaked Xperia XR. However, it would not make sense for Sony to show us the new handsets already available back in the invite. Also, there are no more rumors on Sony available currently instead of the one on new Sony phone, Xperia XR, so we assume it to be the one becoming official on 1st September. 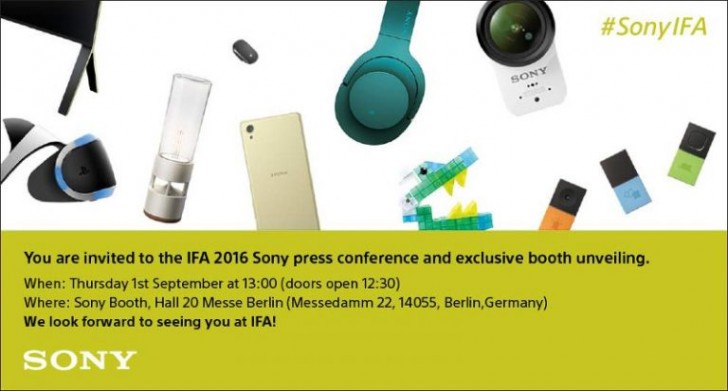 Also, a smartphone with model numbers F8331 and F8332 was surfaced online with USB Type C port and specifications almost similar to the Xperia X Performance. But this smartphone is said to feature a different design pattern. There are rumors that this handset will be called Xperia XR and XZ but we will be required to wait for two more weeks to get a look at this handset.

Sony is all set to showcase the PlayStation VR along with a Bluetooth headset, a pair of headphones, a new TV, a camera, and some other devices clearly visible in the image. The Japanese giant is already selling the Xperia X Performance handset in UK.