Samsung Galaxy A5 2016 edition still exist the market but it seems that the manufacturer wants to bring a new one. It is reported that the Korean giant is working on a refresh version of this phone which will carry a model number SM-A520F. This new version seems to be graced with an evolutionary upgrade, with an Exynos processor and an extra gigabyte of RAM. 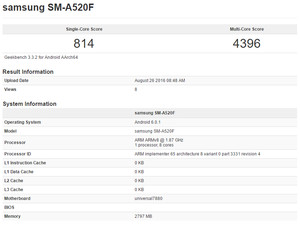 As per the Polish blog, Tablety, SM-A520F was caught on both the GeekBench and GFXBench benchmarking websites. We know that the current Samsung Galaxy A5 phone powers a Qualcomm Snapdragon 615 processor. The benchmark indicates Samsung’s own octa-core Exynos 7880 chipset which will take care of proceedings, edged by Mali T830 graphics.

Both the primary camera and selfie camera of this smartphone offer 16MP resolutions, and the secondary camera will be graced by f/1.9 aperture. Samsung Galaxy A5 2016 is packed with 2,900 mAh battery, which might get bump to 3,000 mAh size. The internal storage might double to 32GB while the RAM might increase from 2GB to 3GB.

The benchmarks point towards Android 6.0.1 Marshmallow operating system with TouchWiz user interface. Also, we know that December to January is the frame of past releases so we can believe the new Galaxy A5 won’t release until this year ends. By that time Android 7.0 Nougat will also be released by Google, but the Galaxy A5 came packed with Android 5.1 Lollipop software despite the Marshmallow having been around for months so we can guarantee for new version of Android.