As we know, Samsung is preparing to soon roll out Samsung Galaxy A3 (2017), Samsung Galaxy A5 (2017), and Samsung Galaxy A7 (2017). It is reported that all these three will be the third generation versions of each of these handsets. The Korean giant has already revealed that these phones will have following model numbers SM-A320F, SM-A520F, and SM-A720F respectively. 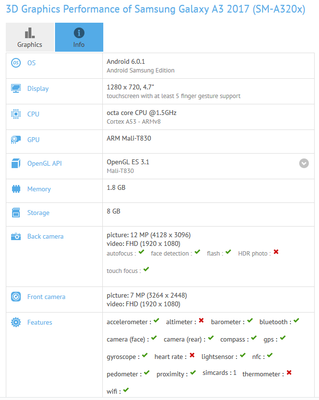 There are reports that Samsung’s Galaxy A3 (2017) has just made an appearance on the GFXBench benchmark, which also gives an idea of the specifications of this smartphone. According to the results of GFXBench, this smartphone will get a 4.7 inch display with 1280 x 720 pixels resolution. It will be pwered by Exynos 7870 SoC chipset with 1.5 GHz clock speed and Mali T830 graphics. This phone will sport an internal memory of 8 GB and has 2GB RAM inside.

Yesterday, we reported that Samsung Galaxy A7 (2017) edition is also spotted on GFXBench benchmark database.