Samsung’s Galaxy A8 has been leaking much from a few days, including in the official looking renders. This smartphone from the Korean giant is also certified by FCC and the Bluetooth SIG. Some say the Samsung should now make this handset officially available. Not only this but the Galaxy A8 is also spotted on GFXBench and GeekBench benckmark databases with similar specifications. 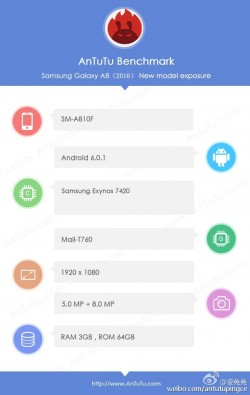 Now, there are reports that the phone has also spotted in AnTuTu benchmark, which reveals its hardware features. As per the benchmark database, this phone sports a Full HD display and will come powered with Exynos 7420 chipset and has been provided with 3GB RAM for faster processing speed. There is an 8MP primary camera for clicking your best ever moments and a 5MP front facing camera for clicking selfie images. It runs on Android 6.0.1 Marshmallow operating system and is provided with an internal storage capacity of 64GB.

However, we can’t say that the camera specs have any truth as the predecessor Galaxy A8 had a 16MP primary camera. It has been revealed by AnTuTu that there will be a version of Samsung’ A8 (2016) sold with a 64GB storage packed internally. So far, we have known only about a 32GB Model of this handset. Both these smartphones will get a microSD slot for expansion. Also, it is expected that this phone will get a 5.7 inch display identical to that of the original Galaxy A8 model from 2015.