Carphone Warehouse, which is a UK retailer, is sending out the refurbished Galaxy Note 7 units to some of its customers, who purchased this smartphone when it was launched. A user received the same from Samsung, what he thought was a brand new Galaxy Note 7 from the retailer but found it was a renovated model.

The user also received an email which states that the UK retailer received some replacement units of Samsung Galaxy Note 7 on 9th September. These units are already sent out to the stores immediately to be used for replacement purpose for customers. However, the letter doesn’t confirm whether the replacement came from Sam sung. 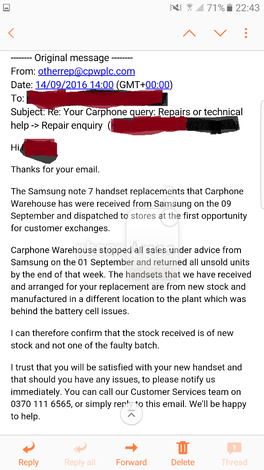 As per this email, the Carphone Warehouse has stopped selling the Note 7 phone from 1st of September and has also returned all the inventory of the phone to the Korean giant by the end of the first week of this month. It is reported that the replacement units which are received are from the new stock. These are manufactured in a different plant than the one where Galaxy Note 7 units with faulty batteries were assembled. Carphone warehouse is the only one who can confirm that the stock received is new but not from the faulty batch. However, this does not mean that the replacement units sent out are not the refurbished units of Galaxy Note 7 handset.

Above mentioned user who has received this replacement from Carphone Warehouse has provided the IMEI and serial number of this smartphone. It is reported that the serial number of this phone starts with RF that indicates a refurbished phone. But the user said that the replacement was not sent out in a new box. This is how users are receiving refurbished models of the Galaxy Note 7 phone.

If you want to purchase a new smartphone from the Korean giant, you can look forward to the best and cheap Galaxy Note 7 deals from the retailers in UK providing this smartphone at an easily available price.