Sony has started rolling out Android Marshmallow update to its Xperia C5 Ultra smartphone. This update carries a firmware number 29.2.B.0.122 and is currently hitting the dual variant of this phone with a model number E5533 in Italy.

The phone is getting this update over-the-air so it might take some time to hit your handset. But those who are being impatient to experience this new update on their handset can do so by heading to the Settings menu of their handset. 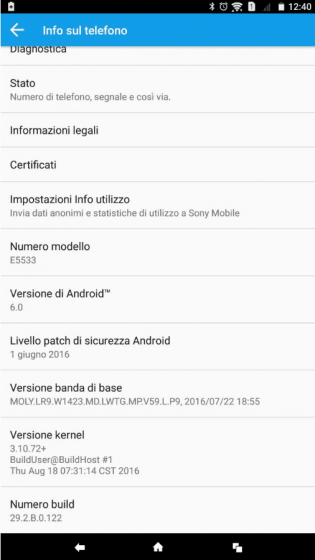 Sony has packed its Xperia C5 Ultra Dual with a 6 inch IPS LCD capacitive touchscreen display with 1920 x 1080 pixels resolution and 367 ppi pixel density. There is an internal storage capacity of 16 GB, which can be further expanded to 256GB using a microSD card slot. The Xperia phone comes powered by an octa core processor clocked at 1.7GHz clock speed, Cortex A53 and Mali T760MP2 graphics. It runs on the Android 5.0 Lollipop and now the users will be able to update to Android Marshmallow.

The screen of this handset has been made scratch resistant. It measures 164.2 x 79.6 x 8.2 mm dimensionally with 187 grams weight. There is a 13MP primary camera with autofocus and LED flash for clicking good quality pictures even in low light. Other features of camera include geo tagging, face smile detection, panaroma, HDR and touch focus. There is a 12Mp snapper in the front of this smartphone which can be used to click your selfie images with 1080 pixels resolution.

This phone has been provided with a number of features for data connectivity such as Bluetooth v4.1, Wi-Fi 802.11 a/b/g/n, Wi-Fi Direct, DLNA, hotspot, GPS, NFC, Radio and USB v2.0. There is a Li-Po 2930 mAh battery, which has the capacity to work without the need of charging for a whole night.

Check out the pay monthly deals on Sony Xperia C4 available from the retailers in UK offering this handset at an easily affordable price range.