Recently, we reported that Samsung launched its Galaxy On7 phone and there were also reports of these smartphones getting launched in Chinese markets. Now, we have brought you the new Galaxy On8 which is the next big thing from the Korean manufacturer. However, it is reported that this upcoming smartphone will not be made widely available since the Galaxy On series seems to be released in Asian countries only.

Currently, the users are enjoying predecessors On5 and On7 (2016) versions but those who are waiting eagerly to get their hands-on the new Galaxy On8 phone will be asked to wait a few more days to get it unwrapped. One of the major retailer of India, Flipkart, has already teased this smartphone and has also mentioned a few of its specifications. 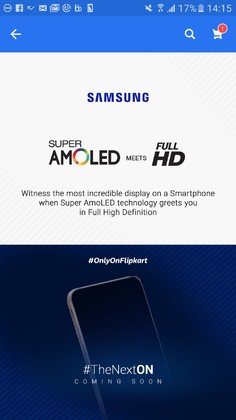 This teaser don’t reveal the name of this upcoming device but Flipkart has used name Samsung Galaxy On8 for its partners for its Big Billion Days sales event, which will start from 2nd October. However, this doesn’t mean in any sense that the Korean giant will launch the Galaxy On8 on the same day. So, we expect it to be officially launched quite earlier.

This new teaser from Flipkart confirms that the upcoming Galaxy On8 phone will include a Super AMOLED screen with Full HD resolution of 1080 pixels resolution. Samsung has also set a metal frame on this handset which sets it apart from other smartphones in the same series. Aside from the above mentioned details, no information is revealed about the Samsung’s new smartphone Galaxy On8. However, we can assume that this device will come running on Android 6.0 Marshmallow out of the box.

The remaining specifications are likely to be teased in the coming days. However, most interesting thing to see will be its price which will put this handset on the Galaxy On8 phone, supposed to be the most advanced series.